The spectacular RAINBOW - nature's own glittering sign of promise to terrestrial beings for countless centuries! What is more relaxing and refreshing than the dazzling sight of the rainbow at the end of a stormy day? No wonder, according to folklore, the sight of the rainbow brings YOU good luck and the elusive pot of gold. Experience the joy of the beautiful rainbow everyday in your home with this kaleidoscopic card game, SIXCHEX™, the crowning touch of family entertainment. May you always find true

This new PLAYMAX ™ card game has been home tested for your enjoyment.
You can play several games at various levels of difficulty. There are easy games to amuse, and teach children

and difficult  games to challenge even the most sophisticated adult.

The rules have been simplified and organized for quick reference so you can start playing without delay. Now, you can enjoy your old favorite card games like POKER and BLACKJACK in six dimensions, plus revolutionary card games with over 100 million incredible combinations to entertain you for a long time to come.

Each symbol appears 4 times in the deck and each card matches with 15 other cards. 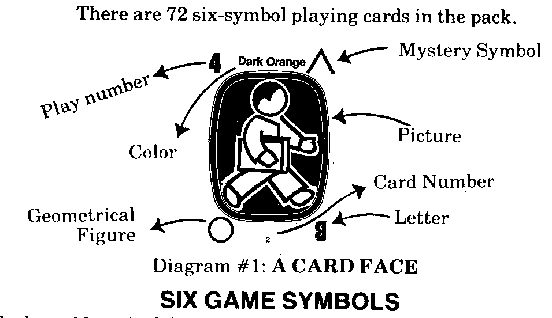 Refer to each game for specific rules. General Instructions: