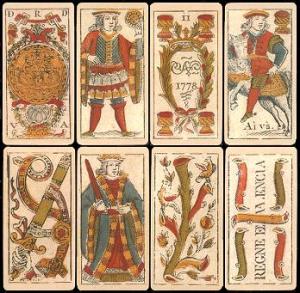 Though many of us use playing cards on a regular basis, most rarely give any thought to their history. While the exact origins of playing cards are not known, they are believed to have come from Asia. Over the years, there has been some dispute as to whether playing cards originated in India or China. There aren’t any implicit records to use as evidence, however wood block printing in China has been traced to the 7th Century AD and paper cards were being used as currency between 600-900 AD in China. Playing cards are thought to have been derived from this paper currency.

Although it’s not clear how playing card variations made their way across the world, there is a great likelihood that merchants who traveled the trade routes through Asia may have carried some of these cards back home with them. Keeping with the idea of travelers bringing them home at their journey’s end, it’s also likely that armies returned from their expeditions with playing cards as souvenirs.

It wasn’t until the mid-14th century that playing cards made it to Europe. By that time, they were very similar to the cards we know today. Shortly after their arrival in Europe, the cards were exclusively illustrated by hand and were a luxury that only the rich could afford. Cheaper methods of production were eventually created because there was such a high demand. By the early 15th century, Germans adopted the process of printing with wood blocks. Once this happened, playing cards gained popularity and were available for all classes to enjoy.

Playing cards swept across the land and by the mid-15th century in France, the suits and court cards that we’re

acquainted with today were invented. Eventually, playing cards made their way to Britain and though one of the earliest documented prohibitions of playing cards took place there in 1463, cards were already so widely popular that the law couldn’t hold them back for long.

Ultimately, cards made their way to America. The pilgrims were creating decks of playing cards shortly after their arrival to the new world and it was in America that the rounded edges were born, as well as the introduction of the joker card. America also perfected the process of lamination and originated dozens of games including bridge and poker.

Playing cards have long been associated with fortune telling and gambling, so it’s no surprise that the cards have been looked at as immoral and dangerous mentally and spiritually. There are many superstitions surrounds cards, both good and bad. Below you will find just a few examples from the many.

Fishermen hold a longstanding superstition that a deck of cards on board can bring about a shipwreck. Also, some miners fear that carrying cards at work can cause a mine collapse or similar disaster.

Card players have long believed that receiving a lengthy run of spades is a warning sign of death of the player or of someone in his family.

Dogs also supposedly bring bad luck to card players when they’re in the same room where the game is being played.

It is believed that blowing on the deck when you shuffle will help you get a better hand.

Also, it is said that if you touch your favorite card before playing a game then you’ll be sure to win.

Prohibition: The Many Bans on Playing Cards 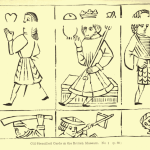 Throughout the centuries, playing cards have been banned repeatedly. Here you’ll find a running timeline of many such bans.

In 1376, Naibbe, a gambling game played with playing cards, was banned in Florence Italy.

Over the next six years, all gambling games which used playing cards were banned in Lille, France.

The Spanish version of Naibbes (Naipes) was banned in Valencia, Spain in 1384.

Playing cards were banned in Ulm, Germany in 1397.

In that same year in Paris, people were banned from playing cards during workdays.

In Langres, France in 1404, the Bishop forbade priests to gamble using playing cards.

In 1476 in Spain, gambling with playing cards was banned by King Ferdinand and Queen Isabella.

Fortunately, the bans in no way stopped the evolution of playing cards. Sometime in the 1600s, the French deck was introduced with 52 playing cards along with our current suit and court cards.

As the popularity of playing cards spread throughout America, the same issues regarding cards in Europe began to arise in the New World. Playing cards were seen as a distraction and didn’t align with the religious doctrines followed by so many. Eventually, as part of a 1624 Virginia law which prohibited drinking and games of chance, playing cards were also banned.

In 1700, another ban at William & Mary forbade keeping horses, horse racing, cock fighting, as well as games of chance such as dice, billiards and cards. Innkeepers who allowed these games to be played could face fines or even lose their licenses if these events took place at their establishments.

When it was obvious that the bans were clearly not working, playing cards were also taxed. For instance, the Stamp Act of 1765 placed a tax of 1 shilling per deck of playing cards and in 1785, the state of Massachusetts passed its own tax on the cards.

Playing Cards: The Foundation for Gambling and Casinos 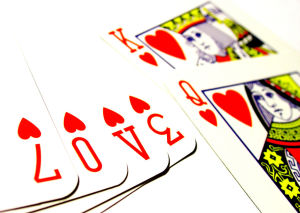 Throughout history gambling has been viewed with disgust by many members of society and oftentimes has been illegal. Despite opposition and suspicion of gambling, some of the western states in the USA legalized it in the 1850s. Shortly afterward, casinos began popping up everywhere in the west. Soon, other states began legalizing gambling as well, but it took until the mid to late 1900s for some states to follow suit.

Today, gambling is a multi-billion dollarindustry. The whole casino industry makes up a huge and important part of the entertainment economy in the United States alone. According to a report conducted by The Brattle Group for the American Gaming Association, the commercial casino industry supported about $125 billion in spending and provided almost 820,000 jobs within the United States in 2010. Though the casino industry has far expanded its entertainment lineup beyond gambling, playing cards was the foundation for these moneymaking giants and continues to be a main staple of the establishment.

A New Era of Card Playing

Now, after all these years and such a rich history, playing cards have evolved into something even more spectacular than anyone could have ever imagined. Joseph Daniels, a talented inventor and businessman, has created a game that is taking the card playing world by storm. This amazing game, which is quickly making its way across the world and into the hearts and homes of young and old alike, is like no other. Enter Sixchex™: the ultimate brain challenge! Sixchex™  is a six-way matching card game that has more numbers, more letters, more colors, more pictures, more shapes and more symbols which adds up to more exercise for your brain and most importantly, more fun!

The first of its kind, this revolutionary card game will bring hours of entertainment while increasing mental agility and luminosity of the brain. Not only can you play with a deck of 72 beautiful rainbow playing cards, but you can also immerse yourself into an online version of the game, as well as a whole community full of other players just waiting to share hints and tricks. What’s more, you can personalize the cards to suit your own needs! If you haven’t already, take the time to have a look around, watch the videos, and give Sixchex™ a try. Are you ready to take card playing to a whole new level? Get in the game!

Get tips and updates!

Important: Enter your contact information so that we may send you secret playing tips and updates for Sixchex(TM) Six-Way Rainbow Playing Cards.